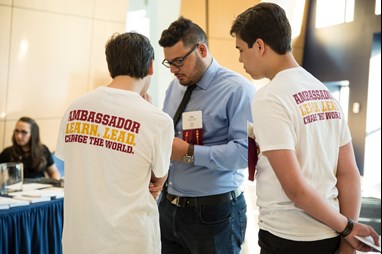 This summer, NSHSS reached out to our ambassadors to ask questions regarding important community issues and what they would like to do to raise awareness. As it turns out, the current issues ambassadors wish to address paralleled the issues of greatest interest in the NSHSS Scholar 2016 Millennial Career Survey.

In the Millennial Career Survey, the issues students were most interested in impacting were as follows:

Coincidentally, the issues that resonated with members in the survey align with the issues NSHSS Ambassadors wish to address. The top two issues address were education and health.

Education is a topic of concern in the survey and in the community. Often, NSHSS Ambassadors feel as if students are not taking advantage of an opportunity that many in the world do not have.

“Today, many teenagers are not enthusiastic about going to school, and education has become something that is not taken advantage of,” says NSHSS Ambassador Morgan Band.

Realizing that education is a privilege, Morgan promotes involvement in academic honor societies and serves as a tutor to help those in need. Through tutoring, Morgan hopes students realize the importance of education and feel motivated. She says, “the motivation in school can lead to the determination to conquer bigger problems outside of the classroom.”

NSHSS Ambassador Veronica Ortega has noticed her peers are not as enthusiastic about learning. By using a few of the basic principles of psychology, she has created a plan to help shift the frame of mind when it comes to education.

First, it is important to balance the number of students in the classroom. Students tend to succeed in a smaller environment.

Many students seem to respond better to extrinsic motivation to perform well in the classroom. “Teachers should begin to implement different and refreshing ways to learn such as rewarding candy or extra credit to motivate students,” says Veronica.

Today’s students learn through technology and those around them. That being said, ads can be used to promote similar learning as they have for anti-smoking and drug campaigns. By asking teachers to hang posters and inspiring quotes and talk to students, it is possible to change the negative perception of education.

Parima Sharma: STEM Events to Encourage the Women of Tomorrow

NSHSS Ambassador Parima Sharma wanted to encourage more women to pursue careers in the STEM field. As a result, Parima hosted a Girls Robotics Day in her high school to promote further interest in engineering and robotics. Additionally, she hosted a screening of the movie Code Girl to motivate and excite girls who are interested in computer science.

Another issue of concern to NSHSS Ambassadors and members is understanding the importance of mental and physical health.

“In this generation, many people are more involved in their social life," says Ambassador Alexandra Dent, “The internet makes people more judgmental towards one another which leads to bullying.” Alexandra would like to address the issue of bullying by informing individuals that the internet is a resourceful tool but it should not be abused.

The ambassadors who identify bullying as an issue in schools want to inform their peers of the effects of bullying and create consequences to discourage that behavior. “I highly encourage that all schools enforce a zero tolerance policy with ways to prevent the physical and mental distress, especially in an educational facility,” says NSHSS Massachusetts State Director Irene Namer. To further the zero tolerance policy, Irene, as well as many, would like to make bullying a community issue, involving businesses and local police departments.

Some of the health-related diseases that are on the rise in America are due to lack of a balanced diet. “Personally, I see health and the current crisis of conditions like obesity, diabetes, and cardiovascular disease as one of the greatest problems we face as a nation,” says NSHSS Ambassador Tamara Gomez-Ortigoza. Understanding the severity of these diseases, Tamara has become a health advocate in her school by creating a wellness magazine and informing her peers on the importance of eating a healthy diet. For those who would like to transform their lifestyle, Tamara offers support and assistance with the transition to becoming vegan.

NSHSS Ambassadors are student leaders within their high schools who exhibit academic excellence and strong commitment to community service. As role models, Ambassadors are encouraged to inspire their peers to explore new initiatives within their high schools and communities by organizing community service projects and gatherings with fellow members to support the vision of NSHSS.

Ambassadors receive preference in participating in member events and also have the opportunity to compete for the $1,000 Ambassador Scholar Awards made available only to our senior Ambassadors each Spring.

To qualify for membership in the Ambassador Program, existing NSHSS members must be in their sophomore, junior or senior year of high school with a cumulative GPA of 3.7 or higher. If you are interested in becoming an Ambassador and would like to get more involved with the Society, you can learn more about the application process on the Ambassador Page.

Currently, more than 2,400 scholars are actively participating in the NSHSS Ambassador Program.