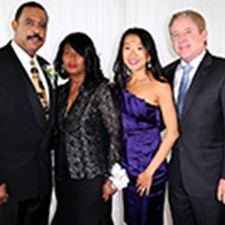 An Evening with The Stars Gala

On Thursday, April 30, 2015, the Selective Corporate Internship Program (SCIP), a New York based youth leadership organization, celebrated its 18th anniversary of making a difference in the lives of tomorrow's leaders at its Evening with The Stars Gala at Battery Gardens in New York City. Mr. Nobel was the 2014 recipient of SCIP’s Humanitarian of the Year Award.

At the gala, NSHSS was proud to recognize 18 young leaders participating in SCIP’s Summer Leadership Program with membership in the Society. NSHSS President James Lewis and NSHSS Fellows Program Executive Council Member Morgan Vasquez presented students with medallions and the NSHSS lifetime membership certificate. At each step along the way – from high school to college to eventual careers – NSHSS connects outstanding young scholars with the resources they need to develop their strengths and pursue their passions.

SCIP also saluted corporations, educators, entrepreneurs and nonprofit organizations for their investment in the next generation of young leaders. The 2015 SCIP Honorees include: