NSHSS invited all of our members, families, educators, and partners to join us online for the live final round of the Be More-a-Thon recognizing innovation for world betterment. The winners of the ten $10,000 Be More Fund grants were chosen and awarded in real time on November 14, 2020 in an exciting final round!

The NSHSS community celebrated Mr. Nobel's 90th birthday on July 20, 2020 with gifts of song, verse, artwork, and words of gratitude for his support of students and service to world betterment.

In the spring of 2020 in response to the global coronavirus pandemic, NSHSS shifted to remote work and the rapid development of resources to support our student and educator community. We launched more than 60 free virtual webinars, several new scholarships, and a series of relevant World Betterment initiatives.

On October 25-26, 2019, NSHSS teamed up with St. Jude Children’s Research Hospital and ALSAC to bring a group of our members to the St. Jude campus in Memphis, TN for an event that allowed them to explore all aspects of careers in healthcare and research.

On Auguest 3-4 2018, NSHSS implemented the first-ever Passion Projects Exhibition during Scholar's Day D.C. giving members from around the world a chance to showcase their research, passion, and solutions to the issues most dear to them. Presented to a panel of judges as poster board exhibits, student exhibitors competed for up to $2,500 in scholarships.

On March 26, 2017, NSHSS and its collaborating university partner The University of Hong Kong, hosted the first member event. This event gathered over 200 high-achieving high school students to hear about opportunities for college preparation and scholarships. NSHSS Co-Founder Mr. Claes Nobel shared his message of universal peace and asked students to to be good stewards of the earth.

Mr. Nobel at the UN

Claes Nobel Receives Humanitarian of the Year Award from SCIP

NSHSS scholars joined a group of nearly 2,000 of their peers at the High School Presidential Inaugural Conference in Washington, D.C., January 19-23, 2013, in conjunction with the Inauguration of the President and Vice President of the United States. NSHSS partner Envision sponsored this unique and historic event.

The NSHSS Fellows Program is an alumni network of NSHSS members who have graduated from college, who are actively involved in the academic, corporate, arts, or non-profit communities across all industries, and who are deeply committed to improving themselves and the communities in which they work and live. As of 2020, there are more than 600 active NSHSS fellows.

Mr. Nobel returned to his native country to share his insights with students during the annual Nobel Week celebrations in Stockholm, Sweden, where the Nobel Prizes are awarded. On December 6, 2012, Mr. Nobel addressed Swedish and international students participating in Business Administration and Political Science Bachelor’s Program at Stockholm University.

James Lewis Receives Phoenix Award from the City of Atlanta

The prestigious Phoenix Award was presented to James Lewis on behalf of Atlanta Mayor Kasim Reed at the NSHSS Holiday Member Event held at The Carter Center. Mayor Reed said, "Atlanta is truly blessed to say James W. Lewis is one of her own. He gives so much to students and works hard alongside of them to set an example for others to give selflessly."

Usher Raymond IV, Founding Chairman of Usher's New Look Foundation, and award-winning musician, honored Mr. Nobel with the New Look Foundation Service Legacy Award during a ceremony closing the 2012 World Leadership Conference in Atlanta. He was honored for his establishment of NSHSS, exemplifying his passionate leadership for youth, environmental stewardship, and humanitarianism.

Mr. Claes Nobel delivered the commencement address to the Virginia State University graduates on May 13 in Richmond. University President Keith T. Miller also conferred upon Mr. Nobel an honorary Doctorate of Humane Letters, recognizing him as “a renowned champion of environmental stewardship and youth leadership.”

NSHSS Educator of the Year Program Is Launched

The Educator of the Year award is presented annually to an exemplary educator who has demonstrated an outstanding commitment to preparing students for success in college and in life. This recipient exemplifies best practices in teaching, is an outstanding role model for peers and students, and demonstrate outstanding leadership and excellence in education.

NSHSS President James Lewis, who serves on the advisory board for this important initiative, accompanied NSHSS members to the Be A STAR kick-off gala in Washington, DC. “STAR” or "Show Tolerance And Respect" has a mission to ensure a positive and equitable social environment regardless of age, race, religion, or sexual orientation through grassroots efforts beginning with education and awareness.

Mr. Nobel was invited to preside over the open or closing bell ceremony at the NASDAQ Stock Market in Times Square to celebrate his 80th birthday. The tradition continued for many years, thereafter. He was showcased, along with NSHSS, for his dedication to encouraging today’s young scholars to become tomorrow’s leaders. Following the ceremony, Mr. Nobel met with scholars and their families in the Times Square NASDAQ reception rooms.

NSHSS Ambassadors are high school leaders representing the Society as positive role models. NSHSS offers the Ambassador Scholar Award to support college tuition scholarships for outstanding seniors each year who have demonstrated the characteristics of a model Ambassador. Today, more than 6,000 students participate in the program.

Each year NSHSS surveys its membership, charting preferences and attitudes of high-achieving students in the areas of career choices, workplace environment, educational goals, and more. The research can yield insights into developing strategies for employers and for engaging the emerging talent pipeline. The survey receives national press coverage each year.

Claes Nobel was honored at Grauman's Egyptian Theatre in Los Angeles, CA, at the 4th annual Artivist Film Festival & Artivist Awards for his commitment to global leadership in environmental ethics and youth outreach and for his inspirational work towards a better world.

More than 500 NSHSS members met Nobel Laureate in Physics, UCSB faculty, and NSHSS Advisory Board member Herbert Kroemer during the member event at the University of California, Santa Barbara. The program celebrated “The Passion of Invention,” a theme inspired by Mr. Kroemer.

NSHSS held the first-ever annual holiday recognition event in December at The Carter Center. Founded in 1982 by former U.S. President Jimmy Carter and former First Lady Rosalynn Carter, the Atlanta-based Carter Center helps to improve the quality of life for people around the globe. The event included workshops, panels, a college fair, and more. More than 450 students, educators, and families attended the event.

More than 1,500 students compete for this prestigious award each year. This scholarship was established in honor of former NSHSS Vice President Robert Sheppard. This scholarship is awarded to students who demonstrate outstanding dedication and initiative in ongoing projects that better their communities.

Each year, members are invited to nominate a teacher who has made the most difference in their lives and has inspired them as an outstanding role model. These dedicated teachers and counselors are recognized as Claes Nobel Educators of Distinction and are celebrated at events. To date, NSHSS has recognized 55,000 Educators of Distinction worldwide.

NSHSS hosted an annual celebration honoring our scholars and educators in Washington, D.C. Students, teachers, families, and NSHSS friends and partners gather from all over the world to recognize achievements and to be motivated and inspired by outstanding mentors in the U.S. capitol.

NSHSS Collegiate Council members are college students selected for their outstanding leadership abilities. They offer advice to high school members about preparing for and succeeding in college. They participate in member events and also share their experiences through social media and articles. In 2003, over 200 students served on the Council.

NSHSS is founded by Claes Nobel and James Lewis

The Society was established in order to continue Mr. Nobel's family legacy of recognizing and rewarding excellence. The mission of the organization is to recognize academic excellence and to encourage members to apply their unique talents, vision, and potential for the betterment of themselves and the world. The Society has now grown to 2 million members worldwide since its founding.

Founded in 2002, NSHSS has inducted over 2 million members from over 170 countries. NSHSS recognizes academic excellence among high-achieving scholars, offering a wide array of resources supporting transitions from high school to college, and college to career. 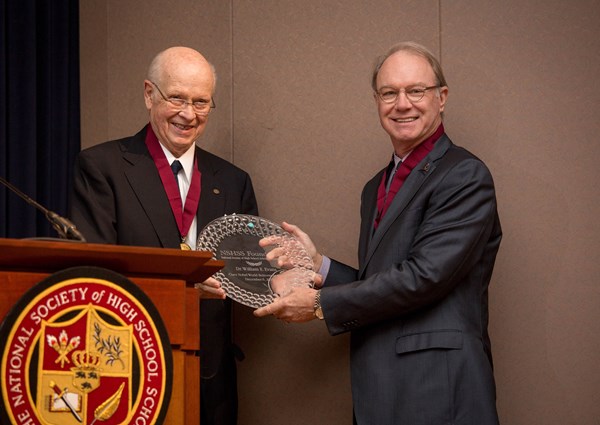