If you’re looking to contribute to the success of other NSHSS alum, our Fellows program might be a great way to stay involved with us while giving back. NSHSS Fellows dedicate themselves to connecting our alumni members with resources and opportunities to further our alum’s academic and career aspirations.

Fellows are involved in bettering their communities through corporate efforts, their work with nonprofits, academics, or the arts. They truly are committed to bettering themselves and the communities they work and live in. Our Fellows community is made up of nearly 700 members who further the NSHSS mission of world betterment by bringing together alum members and current scholars through networking events, NSHSS member events, and mentorship.

Interested in becoming a Fellow? You must be an NSHSS member with an undergraduate degree or three years work experience in your chosen field.

To connect with one of our Fellows or to find out more about joining, email us at fellows@nshss.org. 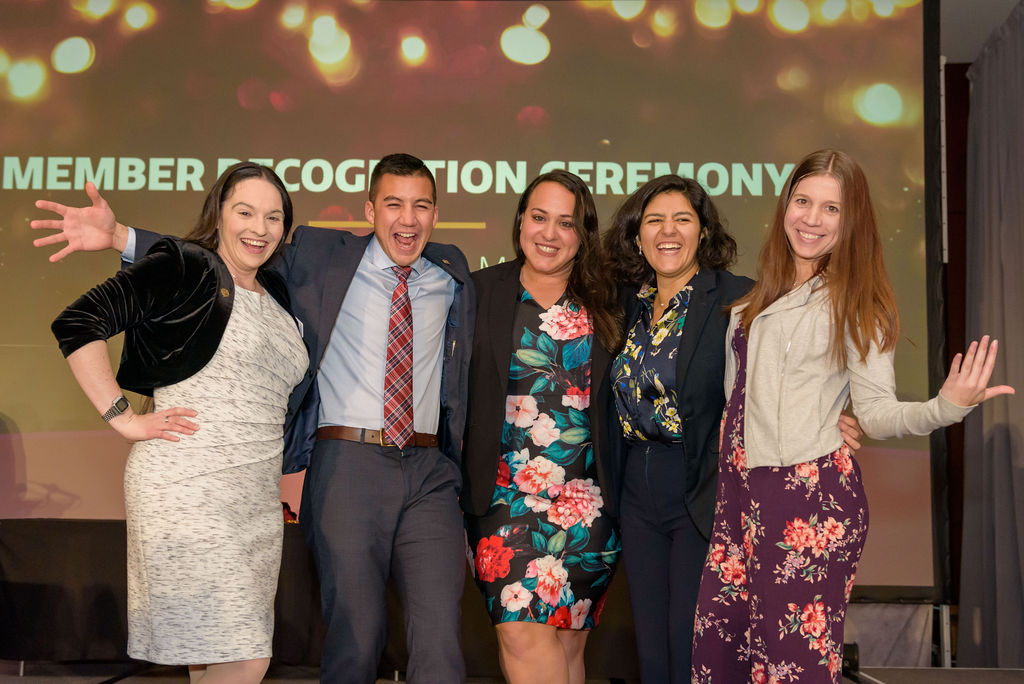 If you're an NSHSS member who has graduated with an undergraduate degree or has the equivalent of three years work experience in your chosen field, you're eligible to become a Fellow. Thanks for joining us!

Applications are open year-round, but reviewed on a rolling basis twice per year:

Laura Amortegui is a Colombian American who has been living in the D.C. area for the past 20 years. She currently works at Cambium Assessment Inc. in business development and finances, working on writing and developing proposals. Previously, American Institutes for Research, and at Georgetown University, at the Center for Intercultural Development and Education, to coordinate the learning exchange between international students, Georgetown professors, and businesses in the area. She earned her M.B.A and B.A of Communications at Loyola University Maryland. Laura is also the proud current President of the NSHSS Fellows Executive Board.

News Anchor/Reporter for 21Alive (WPTA-TV) Tony Betton Jr. is the weekday morning anchor and special projects reporter for 21Alive in Fort Wayne, IN. Tony is a native of Atlanta, GA, and graduated from Georgia State University ('19), where he studied broadcast journalism, public relations, and entertainment media management. In addition to his anchor role in Fort Wayne, is a Gray Television ambassador and the On-Court Emcee for the Fort Wayne Mad Ants (NBA G League). He serves on the planning committee for the Big Brothers Big Sisters of Northeast Indiana’s Black Business Card Party. He is an alumnus of the Usher’s New Look Foundation, having just celebrated ten years in the program. He is also a member of the National Association of Black Journalists and the founder of his own media company, The REP Zone. Before ABC21, Tony was a studio production intern for ABC News' Good Morning America in NYC and completed internships with Channel 2 Action News (WSB-TV), the Boys and Girls Clubs of America Headquarters, Ryan Seacrest Studios, & FOX 5 Atlanta (WAGA). When he is not reporting, you may find Tony volunteering in the community, hosting special events, public speaking, finding more ways to build his brand, and hanging out with friends and family. He also loves to inspire others to find their passions and follow their dreams. #LitJournalist

Morgan Vazquez is the Head of Early Career Talent Acquisition and Programs at Walmart. In her role at the world’s largest retailer, Morgan leads a team of over 30 Human Resources professionals who recruit high-potential, diverse early career talent for the enterprise and develop robust intern and new associate programs aligned with the company’s strategic business needs. Morgan joined Walmart in August 2020 from the Bank of New York Mellon (BNY Mellon) where she was in a similar role as the Global Head of Campus Recruiting and Emerging Talent Programs. In her five years at BNY Mellon, she led the redesign of their campus recruiting function with a focus on attracting, developing, and retaining a strong pipeline of future leaders. Prior to BNY Mellon, Morgan spent six years at JPMorgan Chase in a variety of Human Resources roles. Morgan is a graduate of Fordham University (Bronx, New York) where she obtained a Bachelor’s Degree in Sociology and Communications summa cum laude. Aside from being a passionate alumna at her alma mater and serving on the Fordham University Alumni Association Advisory Board, she is also the proud National Society of High School Scholars (NSHSS) Fellow. Furthermore, Morgan is a steadfast champion of Diversity & Inclusion and has been named to EMpower/Yahoo Finance’s list of Top 50 Ethnic Minority Future Leaders.

Kolby Keo is a Director at FGS Global, where he develops and executes public diplomacy and communications campaigns for international clients. He previously led stakeholder engagement for the University of California Washington Program (UCDC). Son and grandson of Cambodian refugees, he proudly worked as a legislative aide for U.S. Representative Alan Lowenthal, helping serve the largest Khmer community outside of Cambodia. Kolby serves as co-chair of the Conference on Asian Pacific American Leadership (CAPAL). He is a past president of the global nonprofit Young Professionals in Foreign Policy (YPFP) and served as a city commissioner for his hometown, Garden Grove, California from 2013 to 2015. Kolby received a BA from UC Irvine where he graduated summa cum laude with the Chancellor’s Award of Distinction. He is a proud transfer alum from Orange Coast College where he served as student body president, district trustee, and held regional and statewide offices advocating for California’s community college students.

TELL US SOMETHING GOOD

Our Fellows are always doing something to better themselves and their communities. Whether it's volunteering at a local food bank, mentoring others, or advancing the mission of NSHSS, our Fellows truly are making a difference. If you're doing something incredible, won a professional award or made a major contribution to a community service organization, we want to hear from you! You’re an inspiration to us here at NSHSS, and we think your accomplishments will inspire our members, too.

Submit your achievement here for a chance to be featured on the NSHSS blog, social media or in our quarterly Scholar’s Journal!

NSHSS Membership: An Emphasis on Leadership

NSHSS webinar workshop on resume writing presented on May 27, 2020 by NSHSS Fellows Executive Board…

NSHSS Fellows Executive Board President Morgan Vazquez shares her experience as an NSHSS member. She…