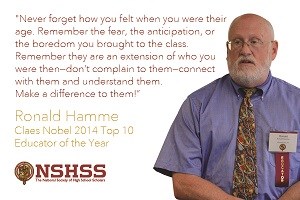 NSHSS 2014 Top 10 Educator of the Year Ronald Hamme says he started his 44-year career in education as a “mediocre teacher.” Three generations of students would find that hard to believe.

Speaking to newly-inducted NSHSS Educators of Distinction at the organization’s 2015 Scholar’s Day in Washington, D.C., Hamme credited his students for his success in the classroom. “I have been blessed with the best kids in the world. I believed in them, they believed in me, and, in turn, I learned to believe in me more. Everything I threw at them they returned better than before. Everything I demanded of them they gave me back double.”

Mr. Hamme ended his career this past year in the same town (Elizabethville, Pennsylvania), the same school (Upper Dauphin High School) and the same classroom where he spent his professional life teaching art.  For the last 26 years, he taught a course he designed called Humanities, the only one offered in the state of Pennsylvania combining art history, music history and philosophy. In 2005 the local Community College adopted the course, offered students 3 credits for it and appointed Hamme an Adjunct Professor.

Mr. Hamme left the educators with a powerful piece of advice: “Never forget how you felt when you were their age.  Remember the fear, the anticipation, or the boredom you brought to the class. Remember they are an extension of who you were then—don’t complain to them—connect with them and understand them. Make a difference to them!”