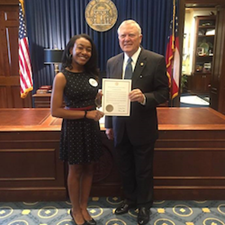 NSHSS Ambassador Kendall Robinson enacts change in her community and beyond!

Kendall Robinson is a high school junior, but she has already become a passionate volunteer. The 16-year-old has volunteered at the Christmas Tree Lighting in Washington, D.C., prepared meals and offered grocery donations to Middle Eastern refugees, led Bible studies in Ecuador, and worked in a mobile food pantry in Atlanta. Kendall also participated in a program of the Atlanta Community Food Bank known as the Youth Summit on Hunger and Poverty. During this Summit, Kendall was expected to spearhead an initiative to better her community. Kendall recalled a brief encounter with a homeless man who explained his feat of stretching one roll of toilet tissue to last an entire month, and she knew exactly how she would assist her community.

As a creative and innovative NSHSS Ambassador, Kendall founded Love Rolls,Inc, a toilet paper non-profit organization, in April 2016. She used social media platforms and distributed fliers to raise awareness about her cause. After a month, Kendall received enough donations to expand her program beyond Atlanta—as she received donations from all across the country. Marriot Hotels, Charmin, Costco, Lexus of Atlanta, Honda-Mall of Georgia, Kimberly-Clark and Georgia-Pacific are among Love Roll’s largest contributors. Kendall has been recognized by Secretary of State Brian Kemp, Governor Nathan Deal, and President Barack Obama. She was recently granted approval for Love Rolls’ 501(c)(3) status as of 10/27/16.

In October 2016, Kendall was a featured guest at the Chick-fil-A headquarters. Chick-fil-A chose Love Rolls as the featured community service project for its annual staff summit.

Keep up the outstanding work, Kendall! If you would like to support Love Rolls, please visit www.loverolls.org. 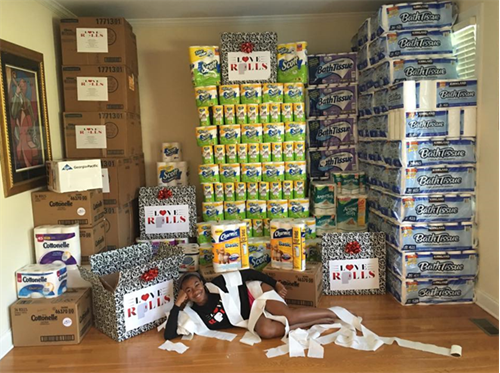