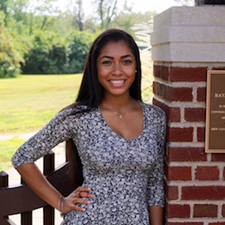 Adriana Deonarine, A Better Chance scholar originally from Brooklyn, New York, is now a senior at Wilton High School, a National Gold ranking school, in Wilton, Connecticut. According to U.S. News, Wilton High School is ranked as the 9th best high school in the state of Connecticut–with 88% of the student body being White, 7% Asian, 3% Hispanic, and 2% Black. A Better Chance prides itself on its recruitment and placement of 500 high-achieving, low-income students of color at 320 of the nation’s top schools annually.

Adriana has written in regard to her peers at Wilton High School, “It pleases me to think that maybe I contributed to their changes in behavior and perceptions, to think that I made a difference. [That] Knowing me expanded their minds and inspired them to look outside of their sheltered, gilded bubble and think about how people outside of their immediate community live. I can accomplish this by being a good example of a product of an impoverished community. I can be a sounding board for all of the questions that they are afraid to ask. I can encourage them to be more open-minded and I can do the same.”

Adriana was selected as a Questbridge 2015 College Prep Scholar, a Gates Millennium Scholarship Semifinalist, and a Coca-Cola Scholarship Semifinalist. She was awarded the Connecticut Olive Crown Latin Certificate for four consecutive years, the Magna Cum Dignitate Latin Gold Certificate for three consecutive years, and she received two state medals for excellence in Latin. Adriana has received awards from A Better Chance National for her leadership roles and academic achievement. With her sister, Adriana has co-founded a not-for-profit, pet food program, Misty’s Mission. The nonprofit program collects and distributes pet food and supplies to a food pantry that services homeless individuals and veterans. Homeless pets ingesting food scraps are in danger of developing harmful, potentially deadly eating disorders. Misty's Mission aims to save the lives of vital companions.

Logging close to 700 hours of national and international community service, Adriana was awarded the Certificate of Special Recognition for Community Service by the Brooklyn Borough President’s Office. Adriana has also published a college research paper in NYU’s student publications. A regionally-ranked student-athlete, Adriana is currently being recruited by multiple colleges to participate in their track and field programs. Adriana looks forward to continuing to excel in both academia and athletics on the collegiate level, and she aspires to become a child psychologist.

Keep up the great work, Adriana!