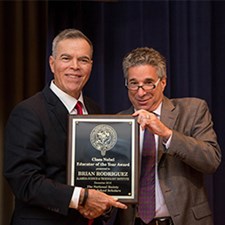 Presenting the 2016 Top Educator of the Year: Brian Rodriguez

Claes Nobel 2016 Educator of the Year Brian Rodriguez began his teaching career in a high poverty, low performing school in Oakland, California, which he describes as “one of the bleakest corners of the educational landscape. . . a school with the windows nailed shut, bullet casings on the playground, where kids would only come to school to get the free breakfast and lunch, because they knew that might be the only meals they would get that day.”  As one of only two white staff members in the school, he learned how to teach from the “caring and skilled African-American staff who tried to reach every child.”

For the past eighteen years, Mr. Rodriguez has taught history (United States history, Advanced Placement U.S. history, modern world history), government and economics at Encinal High School in Alameda, California.  He was a pioneer in bringing the Advanced Placement (AP) program to the school.  In 1996, only fourteen students took AP exams.  By 2012, students were taking 450 AP exams and 70% of them relied on state funding to pay for the exam.  Says Rodriguez, “Some of my most treasured work was building an open enrollment AP program at Encinal, based upon crafting an academically supportive environment for students who traditionally have not been represented in Advanced Placement classes.”  Encinal students now regularly attend the most selective colleges and universities in the country.  The school has been ranked in the top 5% of all schools in the nation by Newsweek and the Washington Post based on the strength of its Advanced Placement program.

Today Mr. Rodriguez teaches at the Alameda Science and Technology Institute, a modern and diverse California high school started by Bill and Melinda Gates.  Its rigorous math and science-based curriculum is designed to support students who have been historically underrepresented in college.  In 2015 the school as named a National Blue Ribbon School by the United States Department of Education.  According to Alameda Unified School District Superintendent Sean McPhetridge, “Brian Rodriguez is an innovative teacher at an innovative high school.  Our students are lucky to benefit from the experience and creativity of passionate teachers like Brian.”

“No one ever rises to low expectations.”  That’s what Mr. Rodriguez tells his students.  He approaches his job with “humility, with an open heart, and with the idea that you will bring out the best in everyone around you.”  The Honorable Trish Herrera Spencer, mayor of the City of Alameda, says of him, “His online blogs, innovative debate and public speaking techniques, melding of music, poetry and art into his lessons and ground-breaking work with students of color and in accommodating specially-abled students in advanced classes, is nothing short of astonishing.”

Nine other outstanding educators round out the NSHSS Top Ten Educators of the Year:

Claes Nobel Educators of the Year

NSHSS is pleased to highlight our 2016-2017 Claes Nobel Educators of the Year, presented to ten exemplary educators who have demonstrated an outstanding commitment to preparing students for success in college and in life. These ten educators are among NSHSS’s student-nominated Claes Nobel Educators of Distinction, a program that recognizes educators who model best practices in teaching, are a positive influence for students and peers, and demonstrate outstanding leadership in education and community engagement. Since the inception of the Educators of Distinction program in 2004, NSHSS has recognized more than 38,000 educators worldwide.