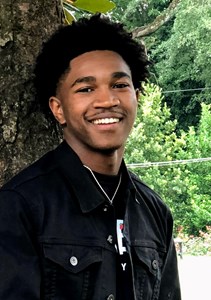 A native of Macon, GA, Jordan Tolbert, son of Jeremy and Rolandria Tolbert, has left a positive mark on his community. Jordan has been a big contender in athletics, as he was part of both his varsity soccer and football teams that both ended with regional championships and even made it to the 'Elite Eight' status in the HS team playoffs. In addition, he was the state runner-up for his Varsity Track team in his most popular event, the 300-meter hurdles. Jordan loves to read in his leisure time. He also donates his time and talents towards volunteering in the community to help local organizations such as United in Pink, a breast cancer awareness organization, and Campus Clubs which serves as an after-school and summer program for lower economic families in the Pleasant Hill area. His peers voted him the first-ever Prom King of FPD (since 2003), and he also serves as an Ambassador for the National Society of High School Scholars. Jordan continues to do his part within his community and strives to create a safer and more understanding community.

NSHSS honors our high school members with the Ambassadors of NSHSS Scholarship, a program established for the student leaders within their high schools who exhibit academic excellence and strong commitment to community service.