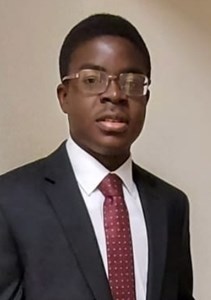 Nabeel has been described as a student who is focused and always eager to learn. As a dually enrolled student, Nabeel has been able to gain a head start in his post secondary credits while also performing as a stellar athlete who displays great sportsmanship. Nabeel is highly ethical and displays great personal strength. We're sure Nabeel will continue to do great things in the future.

The NSHSS 18 Under 18 Award recognizes NSHSS members under 18 with the most influential leadership qualities.