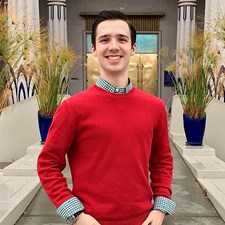 My Personal Journey to Leadership

My name is Greyson, and I am currently a junior at Pacific Lutheran University in Tacoma, Washington. I am majoring in History and Global Studies, with minors in German and French. I have been a member of NSHSS since my senior year of high school, and recently, I was appointed Executive Vice-President of the newly-formed Student Council Executive Board.

(Above) Me at Giant's Causeway, Northern Ireland

One of my deep passions is to travel, see the world, and experience new peoples and cultures. In the last year alone, I have visited and studied in Germany, Austria, and France. This past January, I had the opportunity to spend a month studying peacebuilding and the formation of identities—political, religious, and national—in Derry-Londonderry, Northern Ireland.

For over sixty years, Northern Ireland witnessed intense sectarian conflict that culminated in an era of open political violence known as the Troubles. During this time, Protestant Unionists—who wanted Northern Ireland to remain part of the United Kingdom—stood in firm opposition to Catholic Nationalists, who sought to bring together Northern Ireland and the Republic of Ireland as one united, independent country. The division between the two groups was longstanding, however, with the Protestant majority practicing significant discrimination against the smaller Catholic population for centuries. The impoverished and disenfranchised Catholics tried to speak out, taking cues from the American Civil Rights movement of the 1960s in their strategies for securing equal rights. Tragically, in 1969, guerilla warfare broke out in the streets of Northern Ireland. The Irish Republican Army (IRA) quickly developed an infamous reputation for detonating bombs in civilian areas and gunning down political opponents, and unionist paramilitary groups such as the Unionist Defense Association answered with equal brutality. By the time that the Good Friday Agreement was signed in 1998, approximately 3,500 people had been killed because of the violence, and many more were left with irreversible physical and psychological wounds.

Throughout my stay in Derry, there was one question at the forefront of my mind: Is there truly peace in Northern Ireland today? After only a few days there, my fellow students and I realized that our preconceptions of peace were shallow at best. Northern Ireland experienced a war of the most devastating kind, a civil war that pitted inhabitants of the same villages and towns against one another. Eventually, “peace walls” were erected to separate neighborhoods of opposing religious affiliations. Ironically, the number of such barriers has increased—tripling in quantity in Belfast alone—since the signing of the Agreement, a fact that suggests that the acrimony between unionists and nationalists has hardly subsided.

This is not to say, however, that there is not good work being done to encourage reconciliation across the two communities. Grassroots organizations across the country have brought together Catholics and Protestants to dialogue about their feelings and experiences, with considerable success. One organization unites former paramilitaries, police officers, soldiers, and victims of the violence in putting on theatrical productions that convey their individual experiences. Some groups organize intercommunal basketball leagues to increase contact between Catholic and Protestant youth, in hopes of creating an opportunity for them to find common ground. Other activists have gone a step further in supporting integrated education, in which students from both backgrounds attend the same school and celebrate their differences as part of a shared national identity.

Now that I am back in the States, neck-deep in spring coursework, I look ahead with eager anticipation of my new role in the Student Council and the Society. Upon reflection on my experiences in Northern Ireland, I believe that my trip taught me the importance of three qualities which I hope to exemplify in my new leadership position.

#1: Perseverance. From the time of the Catholic siege of the city in the seventeenth century through the Troubles, the people of Derry endured persecution, violence, and suffering. Today, grassroots activists work tirelessly to foster peace and reconciliation in the region. As young scholars, we may not be facing the same challenges that people our age encountered during the Troubles, but we all face our own struggles. Nevertheless, we must never give up our commitment to pursuing excellence and serving each other, our community, and the world.

#2: Listening. At Giant’s Causeway, as I stood in awe of the beauty and expanse of the northern Irish coastlands, I took a moment to simply listen—to the sound of the waves crashing against the shore, the seagulls soaring overhead, and the wind sweeping through the meandering coastal landscape. Oftentimes, listening seems like such a simple act, and yet it can take a lifetime to master. Listening is not only key to creating peace, but it is also crucial to our development as leaders. It is my privilege and responsibility to listen to you, NSHSS members, as you share your ideas, concerns, and achievements with our international community of scholars.

#3: Trust. During my stay, I met a local man whose father was killed in a gun battle between paramilitaries and British soldiers. The man forgave his father’s killers, and after years of studying Irish history, he concluded that the only way to peace in Northern Ireland was rediscovering the trust that had long been broken between Catholics and Protestants. Similar to the Derry Peace Bridge, trust is a two-way partnership in which both sides leave behind their respective comfort zones and meet in the middle. I assure you that you can trust the Executive Board as we help lead the Student Council and advance the Society.

After a month in Northern Ireland, I learned that peace is a process, one that can only be achieved through active and sincere cooperation. It takes more than simply a piece of paper or a heartfelt dialogue. Effective peacebuilding requires a combination of focused policy, grassroots development, and personal commitment to produce genuine change in society. It is my goal for this next year that we as scholars and members of NSHSS embrace opportunities for collaboration and be the “more” that our Society calls us to be.

(Above) Another image of Giant's Causeway, Northern Ireland 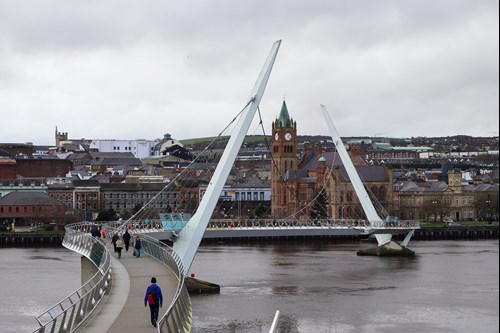