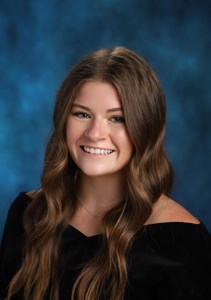 Ainsley Sadler is a 17-year-old International Baccalaureate (IB) program senior at Unity Reed High School in Manassas, Virginia. She is involved in many leadership activities inside and outside of school, including her roles as National Honor Society President, Choir President, Theatre President, National Science Honor Society Vice President, and involvement in various other clubs. Ainsley has participated in over 13 theatre productions and musicals. She is the varsity volleyball team's captain and an equestrian vaulter and coach. Equestrian vaulting is dance and gymnastics on a moving horse, a sport that has allowed her to compete nationally and obtain over 15 champion titles, with two of her vaulters being national champions. She loves training the horses and establishing the same passion for vaulting she has herself in her athletes. Ainsley hopes to continue working with horses in college as she majors in biochemistry and biomedical sciences on the pre-med track. Her aspirations include becoming an anesthesiologist or orthopedic surgeon. Ainsley would like to thank her supportive parents and twin sister for always being there for her and encouraging teachers to establish a life-long interest in learning.

The NSHSS Student Athlete Scholarship is dedicated to student athletes who are passionate about and excel within their respective sports, and within their academic pursuits.